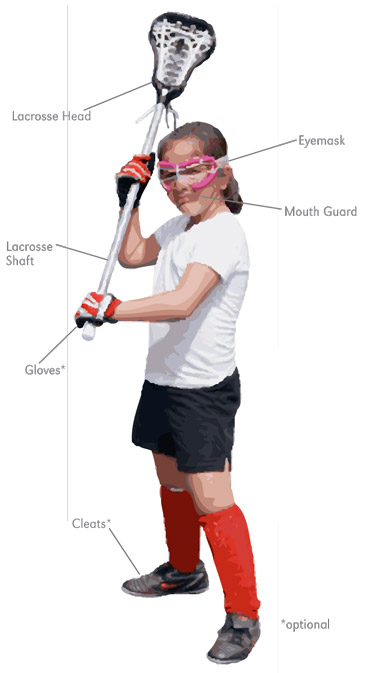 Girl’s lacrosse - No pocket in stick is allowed. Mesh pockets are not allowed.

Rationale - Pockets impact the ease at which the ball will dislodge from the stick (after being checked) and the speed the ball travels.

Girl’s lacrosse - Length of stick is defined and is the same for all field players.

Rationale - Cross-checking is not allowed in women’s lacrosse, while it is in the men’s game.

Rationale - Eyewear is required in the women’s game to prevent orbital eye injuries, where the helmet and face mask provides the same function in the men’s game.  Properly fitted mouth guards covering the top set of teeth are required to prevent serious dental injuries.

Rationale - While there are no specs for a women’s lacrosse soft helmet, soft head protection is allowed to prevent facial and head lacerations. Because contact to the head or body is illegal in women’s lacrosse, hard helmets have not been required or deemed necessary. In women’s lacrosse, a field player would not be permitted to wear a hard helmet because it would be deemed dangerous to other players on the field. A men’s hard helmet has parts that protrude (face mask) and was not developed to or fitted to protect a women’s head effectively. Because a men’s lacrosse helmet does not prevent concussion, a player may not request that she wear a helmet because she is attempting to avoid the effects of another head injury. It is believed that a women’s lacrosse player wearing a men’s lacrosse helmet, given the current rules of the women’s game, could actually put other players at an even greater risk of injury.

Girl’s lacrosse - Soft fitted gloves are allowed and further protective devices based on real medical grounds may be used by players, if the umpires agree that they do not endanger other players.

Rationale - Because contact to the head or body is illegal in women’s lacrosse, hard helmets have not been required or deemed necessary.

Girl’s lacrosse - No intentional contact is allowed to the body or the head.

The following penalties result in mandatory cards in girl’s lacrosse: